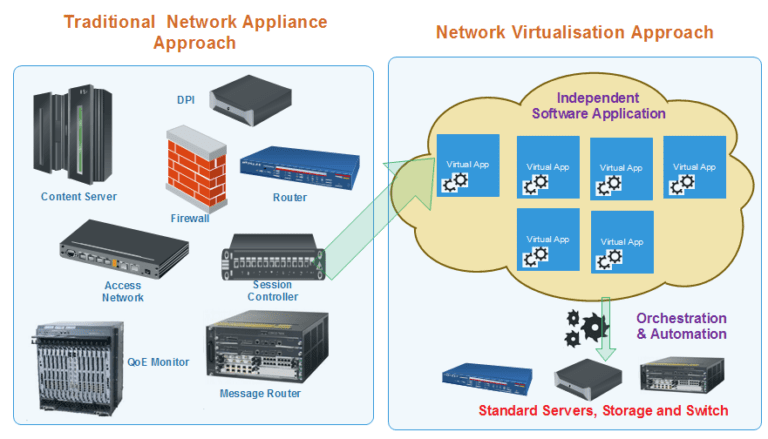 Classical MNO’s network is crowded with a variety of proprietary hardware elements e.g. routers, switches, Packet Core nodes, and Access nodes. Whenever it wants to launch a new network service it often requires yet another hardware element. Finding the space and power to accommodate this new hardware is becoming increasingly difficult, compounded by the increasing costs of energy, capital investment challenges and the rarity of skills (necessary to design, integrate and operate increasingly complex hardware-based appliances).

Moreover, hardware-based appliances have an end of life i.e. 5 years or 10 years, which puts an additional burden of a procure-design-integrate-deploy cycle with little or no revenue benefits on the service provider. Hardware life cycles are becoming shorter as technology and services innovation accelerates, slow down the rollout of new revenue earning network services and restricting innovations in a network-centric connected world.

The Network Functions Virtualization (NFV) is a network architecture or concept that utilizes the IT technology fundamentals to virtualize entire network node functions onto industry standard high volume servers, switches and storage, which could be located in Data centers or centralized locations. Network Nodes are at the end user premises to create communication services and illustrated in Figure #1.

It involves implementing network functions in a software that can run on a range of industry-standard server hardware, and that can be moved to, or instantiated in, various locations in the network as in when required, without
the need to install new hardware equipment.

ETSI has created different standards, the one provided below is one of the most important, which illustrates how the NFVI help us to decouple the hardware and software. 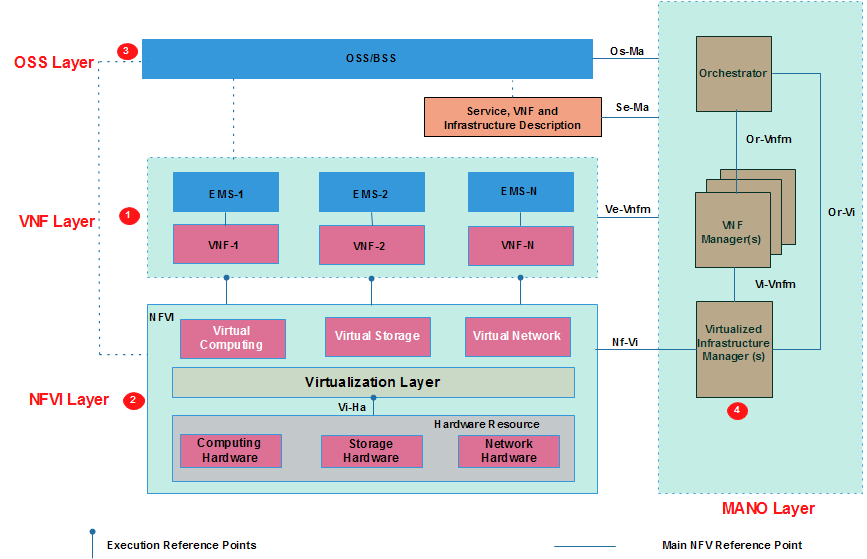 NFV blocks are shown in Figure #2. It can be divided into four layers:

A Virtual Network Function (VNF) is the basic block in NFV Architecture. It virtualized network function. e.g. when a router is virtualized, we call it Router VNF and when a base station is virtual we call it as base station VNF, similarly, it can be DHCP server VNF and Firewall VNF. Even when one sub-function of a network element is virtualized, it is called VNF. For example in Evolved Packet Corer case, various sub-functions like MME, Gateways, and HSS can be separate VNFs which together function as virtual EPC.

A VNFs are deployed on Virtual Machines (VMs). A VNF can be deployed on multiple VMs where each VM hosts a single function of VNF. However, the whole VNF can also be deployed be on a single VM as well.

Element Management System (EMS) is responsible for the functional management of VNF. The management functions include Fault, Configuration, Accounting, Performance, and Security Management. An EMS may manage the VNFs through proprietary interfaces. There may be one EMS per VNF or one EMS that can manage multiple VNFs. EMS itself can be deployed as Virtual Network Function (VNF).

NFV Infrastructure is the totality of hardware and software components which build up the environment in which VNFs are deployed, managed and executed. NFV infrastructure physically can span across several locations, the network provides connectivity between these locations to be part of NFV infrastructure.

From VNF point of view, the virtualization layer and hardware resources shall be a single entity providing it the desired resource.

Virtualization Layer also known as a hypervisor, it abstracts the hardware resources and decouples the VNF software from the underlying hardware to ensure a hardware independent life cycle for VNFs. It is mainly responsible for following:

The virtualization layer in middle ensures VNFs are decoupled from hardware resource and therefore software can be deployed on different physical resources.

In the NFV architecture, the decoupled BSS/OSS of an operator may be integrated with the NFV Management and Orchestration using standard interfaces.

Management and Orchestration Layer is also abbreviated as MANO and it includes three components:

MANO interacts with both NFVI and VNF layer. MANO layer manages all the resources in the infrastructure layer, it also creates and deletes resources and manages their allocation of the VNFs.

Virtualised Infrastructure Manager (VIM) comprises the functionalities that are used to control and manage the interaction of a VNF with computing, storage and network resources under its authority, as well as their virtualization. Virtualized infrastructure Manager performs the following:

There is one more independent block know as Service, VNF and Infrastructure apart from above building blocks. This includes data-sets that provide information regarding the VNF deployment template, VNF forwarding graphs, service-related information, and NFV infrastructure information models.

About Vijay Sharma
Vijay is an IMS, Virtualization testing professional. He has many years of experience in working with VoLTE, LTE/4G, IMS node with major OEMs and ODMs  in various roles
(Testing Engineer, Customer support, network dimensioning).
you may reach him at LinkedIn: https://www.linkedin.com/in/vijay-sharma-86465034/