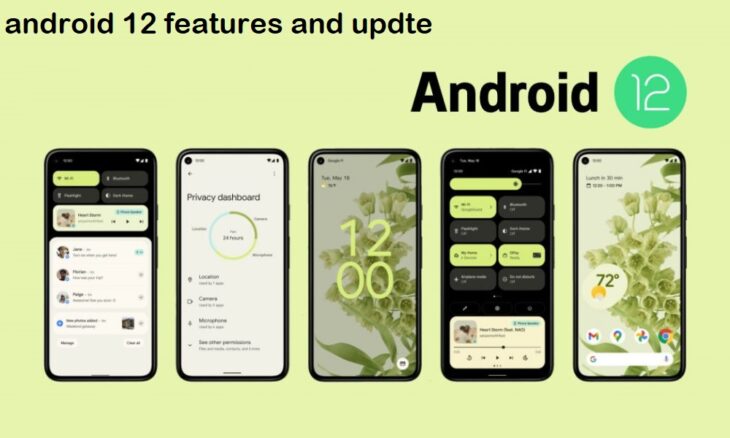 In this Artcile we sahre info about android 12 features and update. The most significant news of the season is the significant redesign in Android 12. The new style, is called Material You incorporates a variety of elements in order to create an unifying style of design that is a common theme across the entire OS. Let’s look at each component individually. And Android 13  preview will be comming soon near about Developer Preview 1 – February 2022.

The extraction of colors is utilized as the base coat of paint which is then used to create the latest design. The OS naturally absorbs the colours of your wallpaper and uses the colors to design designs for your OS. It is apparent what it looks like in the image below. The way it operates is that you create the wallpaper, Android 12 extracts the colors, and then the OS can detect the subtle hints of colors.

Android 12 places a more importance on widgets than older version of Android. The widget selector has been entirely revamped to make it easier to scroll and easier viewing. Furthermore, widgets come with several new APIs that enhance performance, integrate with Material You theming, and even new widgets that are available in Android 12 natively.

Quick Settings received a major overhaul. Quick Settings received a rather extensive overhaul, too. The toggles that were smaller are gone and replaced by bigger rectangular buttons that are rounded. These tiles function the same way as the old toggles, where you can tap them to switch them off and on. The tiles are also updated to access the microphone and camera (more on this in the near future), Google Pay, alerts and smart home devices.

The menu for Settings didn’t just have changes, but some minor adjustments. The new style is heavily influenced Samsung’s One UI with large headers that take up a lot of room. It lets the top settings of each page be easier to use on larger smartphones. The new design , known as Silky Home, required ADB to be used in the initial development previews, but is now accessible for Android 12.

Android 12 Notifications, as well as other modifications

Android 12 has a number of minor changes. It includes animations that improve the user experience as well as a new display that is constantly in motion and changes based on the amount of notifications or notifications which have been updated, as well as other small options that make the OS look more fluid, dynamic and adaptable. These improvements are all around the OS in a variety of manners. The OS also comes with a brand-new animation for charging that plays upon connecting your phone which is very attractive.

Scrolling images were already available before Android 12, but the inclusion to this function is very welcome. The feature was added in the 3rd beta version and was there for a while. It’s a breeze to implement. Take a photo like you normally do and then click to the Capture More option to create the full-screen scrolling image. It is possible to cut it down if that you’d prefer to. The edit area for screenshots was improved by adding new features like text, and many other features.

For a long time auto-rotate was controlled by the accelerometer in your phone. It can sense when the phone is turned on its side, and its screen does exactly the same. Android 12 introduces face detection to enable automatic rotation. The phone will look at your face and will only rotate when it senses that the phone’s orientation has changed. You can also be lie on your back , but your phone will not be able to rotate.

This is a small new feature. The QR code option is accessible as it was in previous version of Android. There’s a new an option below which allows you to utilize Nearby Share to send your Wi-Fi password to someone else’s phone. It’s quicker for sharing your Wi-Fi credentials with many people, and doesn’t require you holding your phone for everyone to check.

Android 12 includes a native one-handed mode. It’s accessible from the Settings menu by clicking System followed by Gestures. The mode reduces everything to half the size. It’s a bit like multi-window, with the exception that the top portion of the screen is completely blank. One-handed mode allows you to access almost everything with one hand on phones with larger sizes.

This fun, minor feature is brand new in Android 12. It’s an API designed for developers that allows their apps to transfer media between applications. You’ll be able to things like copy and paste images from one app to another. It can also be used with text marked-up (bold italic, bold,) and audio files, videos and much more. It could help cut out the middleman in transferring images from one app to another.

Tips for a comprehensive overview

It’s been awhile since the most recent applications section was praised from Google. The year was the year that Google included overview recommendations. If you look in the latest apps section and you’ll see suggestions on what to accomplish. For instance, if have a web browser open the recent apps might recommend that you save the URL to the page you’ve put up to make sharing easier.

There were a variety of minor improvements, like the addition of a number of brand new emoticons and the ability to dim the screen in the accessibility settings and tweaked gesture controls and the quick tap feature on select Pixel devices, which lets you tap the back of the device to operate your phone. Click the links above to find out more about the additional features.

Google has eased up somewhat with its privacy and security enhancements in Android 12. In general, Google has a ton of small changes. In recent times, Google has opted for bigger and more significant modifications.

The Privacy Dashboard was a major topic in Google I/O 2021. It’s exactly what it promises. The dashboard is accessible via the settings. It will show you which applications used what permissions, at what time they were used, and how often. The dashboard’s front contains a graphical dashboard with an image of a pie chart that shows the number of permissions used. Then, you can click on any category to see the breakdown of the apps that utilized the permission, and precisely the date and time they used it.

The camera and microphone indicator

Android 12 also includes indicators for use with microphones and cameras. A camera or microphone indicator appears in the upper right corner of your phone’s screen every time an app uses one of those items. A green dot stays on the screen after the initial indicator fades away to inform you that an application is using the. It’s a simple and quick method to inform the user when the camera or microphone is working.

Google introduced approximative location in Android 12. Its approximate permission allows apps an concept of where you’re located but does not provide a definitive place. It can help hide the user’s exact location from applications that don’t require it. It should be possible to select which permissions you’d like to grant for any app that requests for the location.

One example of how this can be useful is in a weather app. Weather apps don’t require the exact address of your street to provide you with the weather in your area. It doesn’t matter if at home or in the local supermarket the forecast for the weather is exactly the same. There are numerous other instances however, the approximate location of your home will drastically limit the amount of apps that can determine the exact location of your home.

There were smaller security updates.

If you want to learn android soution and android tutorial read hare also. 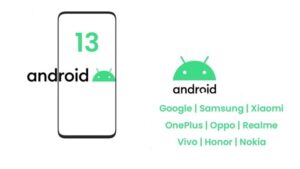