The base station allocates a Physical Downlink Shared Channel (PDSCH) to the user equipment and uses PDCCH to transmit downlink control information for the PDSCH. The user equipment receives and demodulates the PDCCH, and receives the PDSCH based on this downlink control information in the PDCCH. After receiving the PDSCH, the user equipment sends a Hybrid Automatic Re-peat reQuest ACKnowledgment (HARQ-ACK) to feedback the results of decoding. HARQ-ACK is transmitted via the Physical Uplink Control Channel (PUCCH), as are Scheduling Requests (SR) and CSI. The PUCCH transmission timing and resources can also be indicated by the DCI in the same way as the data channel. Figure 5 shows an example of data and HARQ-ACK resource allocation.

In general, uplink data scheduling is followed by scheduling request procedure, in which the user equipment transmits an SR using configured SR resources (Figure 6 (a)). In this scheme, however,

there is an unavoidable delay due to the scheduling request step. Therefore, NR supports configured grants, whereby a Physical Uplink Shared Channel (PUSCH) resource is configured to a user equipment, and the user equipment can transmit a PUSCH with this allocated resource when uplink data traffic arrives without performing a scheduling request procedure (Fig. 6 (b)). 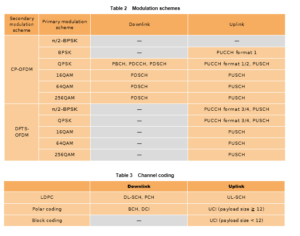