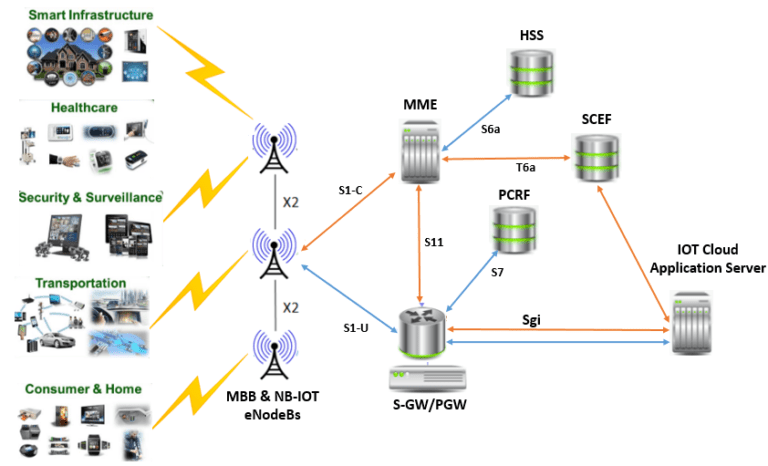 NB-IoT or NB-LTE is a new 3GPP radio-access technology. It is not fully backward compatible with existing 3GPP devices however it is designed to achieve excellent co-existence performance with legacy GSM, GPRS and LTE technologies. NB-LTE requires 200 kHz minimum system bandwidth for both downlink and uplink, respectively. The choice of minimum system bandwidth enables a number of deployment options like a GSM operator can replace one GSM carrier (200 kHz) with NB-IoT or a LTE operator can deploy NB-LTE inside an LTE carrier by allocating one of the Physical Resource Blocks (PRB) of 180 kHz to it. This minimum bandwidth 200 KHz requirement enables three possible modes of operation of NB-LTE which are mentioned as below and illustrated in figure.

NB-LTE also use the same Networks architecture as of conventional LTE Network with some optimization required to support IoT Massive user requirements. The basic architecture for NB-LTE is shown in below and similar to LTE network consist of two part namely Access Network and Evolved Packet System (EPS) Core Network. In access network architecture there is no change, but at Core network the both user plane and control plane, some other optimizations are done to support IoT application. A new node has been introduced as SCEF (Service Capability Exposure Function). The SCEF is designed especially for machine type data. It is used for delivery of non-IP data over control plane and provides an interface for the network services (authentication and authorization, discovery and access network capabilities).