NPBCH stands for narrow band physical broadcast channel similar to PBCH in LTE Technology. The NPBCH is used to deliver the NB-IoT Master Information Block (MIB), which provides essential information for the NB-IOT UE to operate in the NB-IoT network. NPBCH uses a 640 ms TTI, but within the TTI only subframe 0 is used in every radio frame. NPBCH is transmitted in entire subframe zero of a radio frame (except initial 3 OFDM symbols).

Picture Below depicts the location of NPBCH in frequency and in time domain a Narrow Band Resource Block. 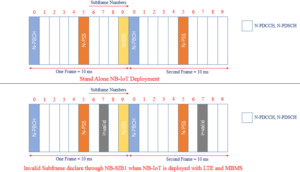