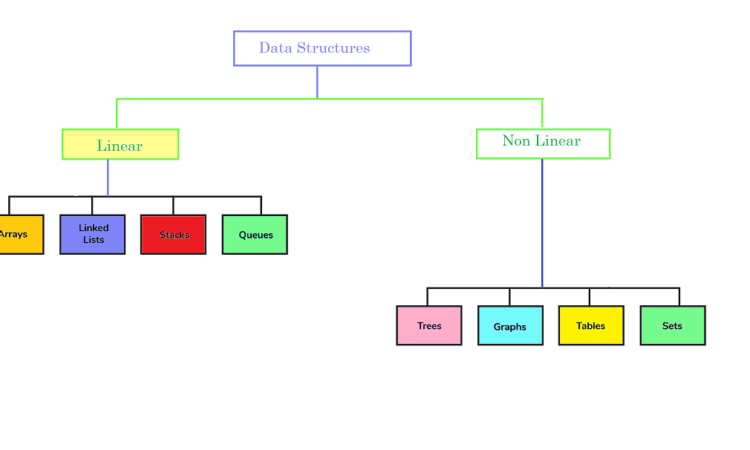 What is Data Structure Classifications, Types, and Applications? Data Structures are an integral component of computers that allow for data to be arranged in memory. They are responsible for efficiently organizing, processing, accessing, and storing data. This isn’t all. Different data structures each have their own advantages and disadvantages. How do you find the right data structure for your task? What does the term “Data Structure” mean? What are the different types of data structures available?

Data structures are used to organize and store data. A data structure is a method of organizing data on a computer in a way that makes it easy to access and update.

Data Structures are an integral component of computers that allow for data to be arranged in memory. They are responsible for efficiently organizing, processing, accessing and storing data. This isn’t all. Different data structures each have their own advantages and disadvantages. How do you find the right data structure for your task? What does the term “Data Structure” mean? What are the different types of data structures available?

We’ve got you covered. This comprehensive list covers everything you need to know about data structure. It includes information on the classifications of data structures and the uses of each type. We will be discussing every aspect of each structure in this article to help you select the right one.

Data structure is something we already know. People often get confused about data type and structure. Let’s look at some differences between data structure and data type to clarify. 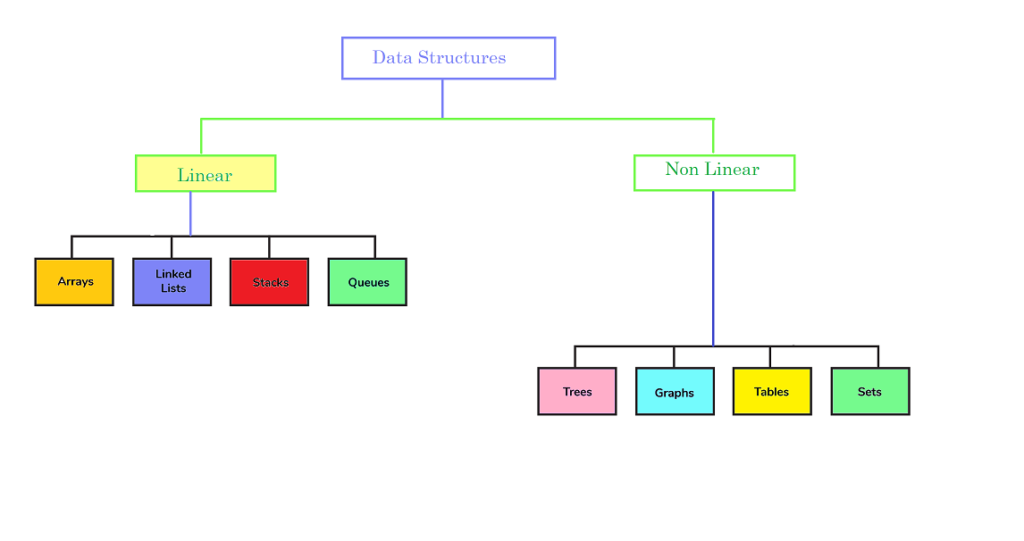 The data structure and the algorithm synthesis are dependent on each other. The data presentation should be simple enough for both the developer and the user to understand it.
Data structures make it easy to organize, retrieve, manage, and store data.
Below is a list listing the data requirements.

An array is a linear data format that stores items at contiguous memory locations. It is used to store multiple items of the exact same type in one location. This allows for fast processing of large amounts of data. A subscript of 0 is used to index the first element of an array. An array can be used for a variety of operations, including Searching and Sorting, Inserting.

Characteristics for an Array:

An array can have many characteristics, such as the following:

Applications of the Array:

These are some examples of different applications for an array:

You want to learn how to create arrays? For the best practice, you can use our curated lists and articles:

A linked list is a linear data structure that does not contain elements at the same memory location. As shown in the image below, linked lists are created using pointers.

The following are some characteristics of a linked list:

These are some examples of different applications for linked lists:

You can get started by creating a linked list. For the best practice, you can use our curated articles or lists: 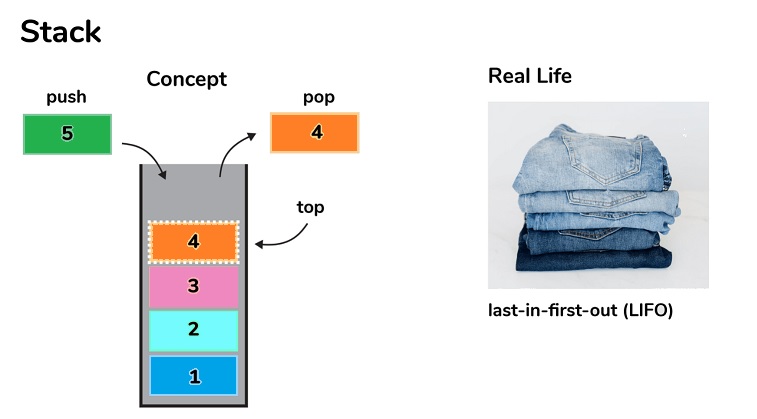 Stack is a linear data format that orders operations in a specific order. LIFO (Last In First Out) is the order. Only one end is capable of retrieving or entering data. Push and pop operations in a stack allow data to be entered and retrieved. You can perform a variety of operations in a stack: Sorting, Reversing a stack with recursion, Sorting and Deleting the middle part of a stack.

Characteristics for a Stack:

Stack comes in a variety of different forms, which include the following:

These are some of the different applications for Stack:

Get started with Stack For the best practice, you can use our curated lists and articles: 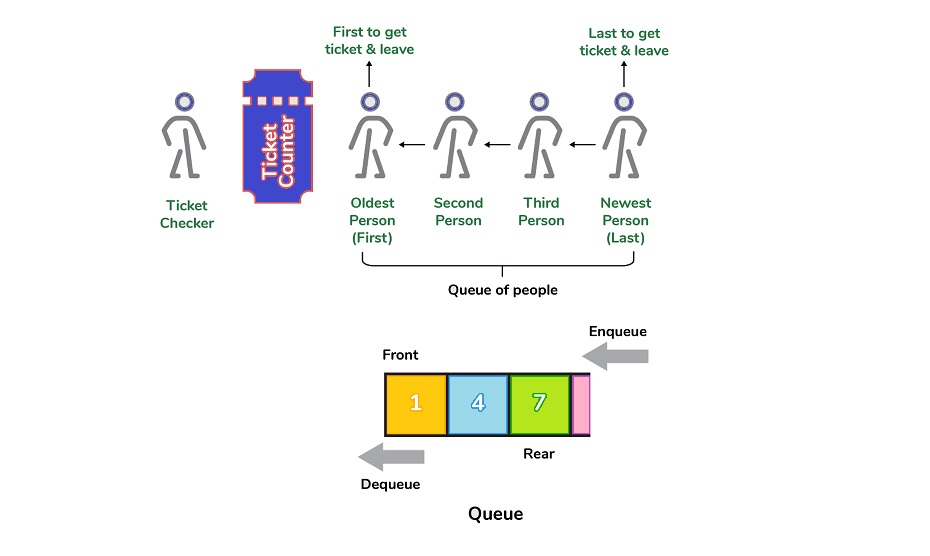 Queue is a linear structure of data that follows a specific order in which operations are performed. The order of operations is First in First Out (FIFO). The data item that is first stored will be accessed first. This means that retrieving and entering data can be done from more than one place. A queue is a collection of consumers waiting to be served. Queue can perform different operations, such as Reversing a queue (with or without recursion), and Reversing the first K elements in a Queue. A few basic operations are performed in Queue: enqueue and dequeue; front, rear; etc.

Queue can have many different characteristics, such as the following:

These are some examples of Queue applications:

Queue is easy to use. For the best practice, you can use our curated lists and articles: 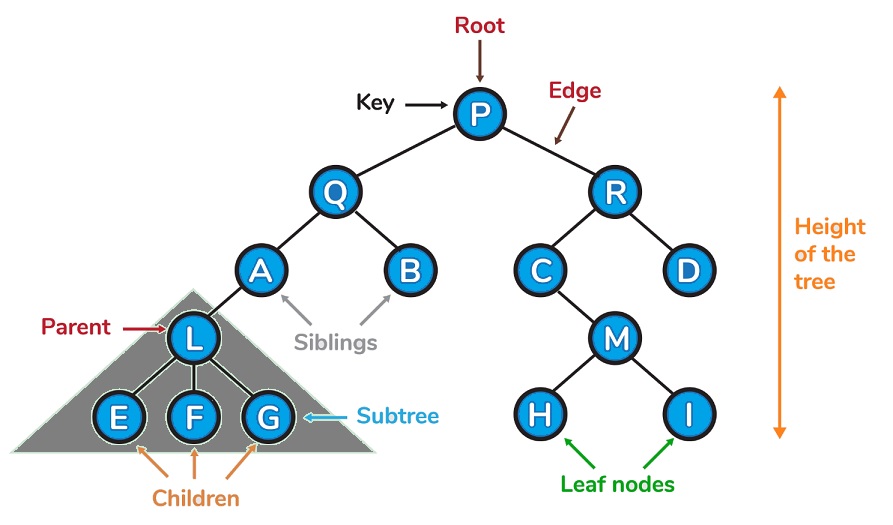 Trees are hierarchal, non-linear data structures that have elements arranged in a tree-like fashion. The root node in a tree is the highest node. Each node has data. Data can be any type. It is composed of a central node and structural nodes. Sub-nodes are connected by edges. Because it is non-linear, different tree data structures make it easier to access the data. There are many terminologies for trees, such as Node, Root and Edge, Height of the tree, Degree of the tree, etc.

There are many types of Trees.

Characteristics for a Tree:

The following are some of the many characteristics that trees have:

These are some of the many uses for Tree:

Tree is the best way to get started. For the best practice, you can check out our lists and articles. 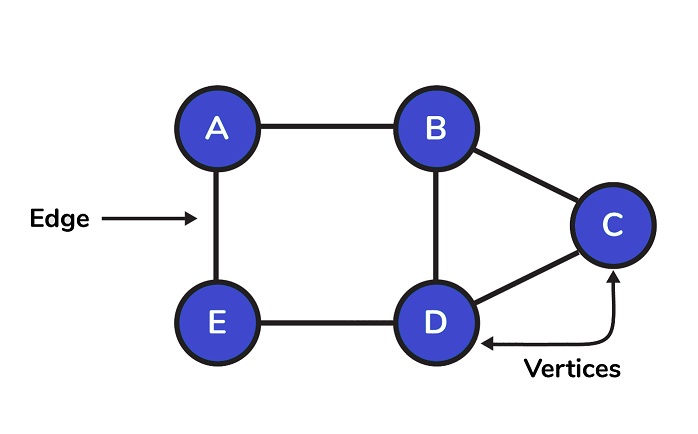 A graph is a nonlinear data structure. It consists of edges and vertices. It is composed of a finite number of vertices as well as a set of edges connecting a pair nodes. The graph is used to solve complex and difficult programming problems. There are many terminologies available for graph, including Path, Degree and Adjacent Vertices, Connected Components, etc.

Graph can have many different characteristics, which are:

These are some examples of Graph applications:

Get started with Graph For the best practice, you can use our curated lists and articles: 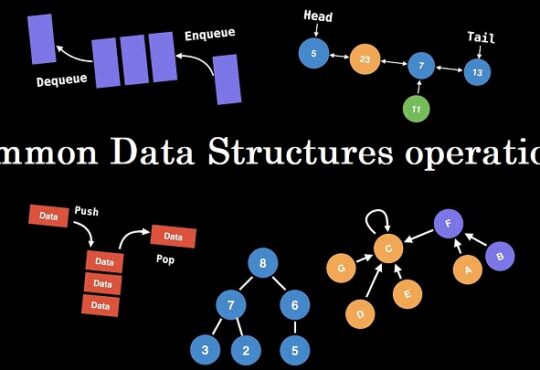