In NR BWP/CA NR Physical Layer Specifications in 5G, the maximum bandwidth per carrier is much larger than in LTE: 100 MHz at frequencies below 6 GHz and 400 MHz at higher frequencies. For carriers operated with such a large bandwidth, NR supports the BandWidth Part (BWP) concept whereby user equipment can use smaller bandwidths than the carrier bandwidth used by the base sta- tion.

In NR, Carrier Aggregation (CA) is defined in the same way as in LTE. When CA is performed, BWP is configured for each Component Carrier (CC). CA using CCs with different subcarrier spacings is also supported, making it possible to efficiently aggregate a wide range of frequencies ranging from existing cellular frequencies to mil- limeter waves.

in the physical layer. These functions make it pos- sible to deliver the high speed, large capacity and low latency services that are expected for 5G. NTT DOCOMO will continue to promote the stand- ardization activities of 3GPP to make further ad- vances for 5G technologies to provide even lower latency and higher reliability for IoT applications, reduce power consumption, and improve direct com- munication between terminals. 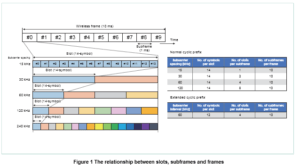